It’s been long time since Tokyo Game Show 2014 was held
I miss this moment so much.. So i think, i’m going to blog about this,
before i forgot.

Tokyo Game Show [東京ゲームショウ], commonly known as TGS, is a video game expo / convention held annually in Makuhari Messe [幕張メッセ], in Chiba, Japan. Every September.
It is the largest game event in the world. It is presented by the Computer Entertainment Supplier’s Association (CESA) and Nikkei Business Publications, Inc. The main focus of the show is on Japanese games, but some international video game developers use it to showcase upcoming releases/related hardware. Tokyo Game Show allows the general public to attend during the final two days.

In TGS, there is always a have event schedule for Cosplay Collection Night @TGS presented by CureCos and official cosplay guest will be perform at that event.
The official cosplay guest will be choosen by Tokyo Game Show Cosplay Project by Negibose KONDO
Negibose KONDO choose the representative cosplayer from 7 countries (Indonesia, Korea, Laos, Malaysia, China, Thailand, Vietnam)
TOKYO GAME SHOW COSPLAY PROJECT will hold the contest for selecting the representative cosplayer at each country.

well, i don’t expect i can be choosen. because i even don’t know TGSCP was held in Indonesia.
it’s really suprised me.

This story starts from when i attended CLAS:H Grand Final 21 June 2014 and participate on Single Cosplay. CLAS:H is one of so many big cosplay event in Indonesia. i participate on this event using my Lastest Cosplay Costume Teostra/Empress SP Female Gunner Armor from Monster Hunter Frontier Generations

This is my entry for Participate for Cosplay Single taken at Cosplay Single Photo Booth, but i don’t event know This is also entry for TGS, well when last time i see this photo the sentence is ‘Grand Final’ not ‘Tokyo Game Show’

at CLAS:H i got ‘Singles Cosplay Favorite Award’ from Ryan Anggoro, the 1 of 16 Guest and Judges at CLAS:H

That just the begining, because i got ‘Singles Cosplay Favorite Award’ so i go to TGS? nope…thats not the way to make me become the Guest Representative for TGS. being choosen for TGS is 100% ‘LUCKY’

1 month after CLAS:H was held, Tokyo Game Show Cosplay Project uploaded my entry together with 19 lucky cosplayer who choosen by Negibose KONDO. all the participant are don’t know nothing about this. CLAS:H aslo didn’t tell us about this, so i wait until the day winner announcement on 4 August 2014
and i really shock! the announcement is I become the Guest representative from Indonesia

how i become guest representative? i have no idea about how they choose it.. until now that’s why i called this ‘LUCKY’

after the announcement CLAS:H and TGSCP contact me about what i should prepare and what i should know
i’m still shock.. happy.. also confused… i don’t know what i should i do.. what i’m gonna do
Go to TGS was my first time go to outside Indonesia.. i never go overseas before..
Specially.. this is i go to Japan! the country that i deamed of!
i really cant imagine, i still don’t believed it on that time.. even i ask so many same question such as
“DO I REALLY BECOME THE GUEST REPRESENTATIVE???”
maybe CLAS:H and TGSCP committee already bored of that question.

then i try to faced the reality that i really go to TGS.
then i prepare everything.. my first Japan Visa, Passport, and national ID cards,
well when the announcement i’m still 16 years old, so i don’t have anything other my student ID card, and i need to wait until 12 August to start make all of it.
TGS was held at 20-21 September 2014 and i just start to make my visa, passport and ID card on 12 August 2014??! it is a very short time, but Thanks God i made it, and there’s no problem about it until i got my flight ticket to japan from TGSCP comittee. but i have bad news, my phone old phone [Samsung Galaxy Note II] was stolen when i go to school, just view days before i go to japan.I ended up buy a new phone [Asus Zenfone 5]. when talk about TGS, i’m always remember my old phone.. so sad..

That’s my luggage, i really scared that might be over weight. but i’m glad, it’s not over weight

Arrived in japan,I meet Hidekazu Kondo-san, he is TGSCP comittee, and then we wait other guest

we go to ikebukuro! otome road!

i found alot of cosplay,anime,game,yaoi stuff there so happy!
and we have lunch at Animate Cafe!
They have special event! “Dramatical Murder”
and we [except Kondo-san] are Fujoshi and we are love Dramatical Murder!

We take a photo with the cute butler Aoba before we go around Ikebukuro, Otome Road,

I didn’t take any photo, because my battery already die.
in Afternoon, we go back to hotels , and i charge my phone at the lobby we meet Ling Ling, she’s Guest Representative from China! who lived in Japan now to study, we also meet WCS China committe.
then we go to Makuhari Messe! the place that TGS was held
and Makuhari Messe so far from our hotels, i even can sleep at car.

When at Rehearsal, i have a little problem about my cosplay, i should be wear Teostra Costume for CCN but, they write i wear Maeda Keiji.. i panicked and i’m worry, but Thanks God, they change it into Teostra.

After Rehearsal, we go back to hotel, and we have dinner at Japanese restaurant nearby.
Kondo-san tell us to wake up early for tomorrow.

And i wear costume at car, i feel like i’m the most complicated person on there.. when i wear my costume, i need help from everyone.. specially the skirt and the armor.. it’s really troublesome! 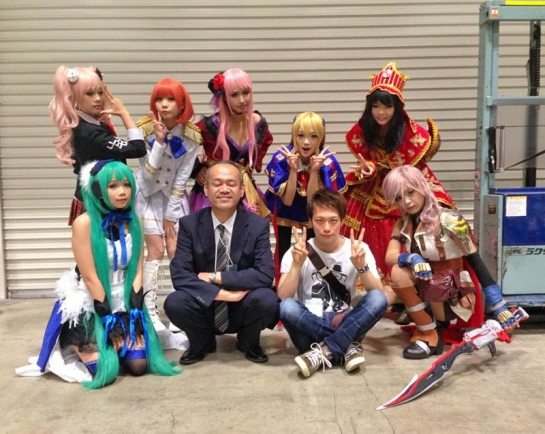 From left to right, Chelses, Valxonia, Code, Ling Ling, Aza, Me, Nanako! Everyone are in Cosplay excepct Kondo-san and KANAME Onii-chan 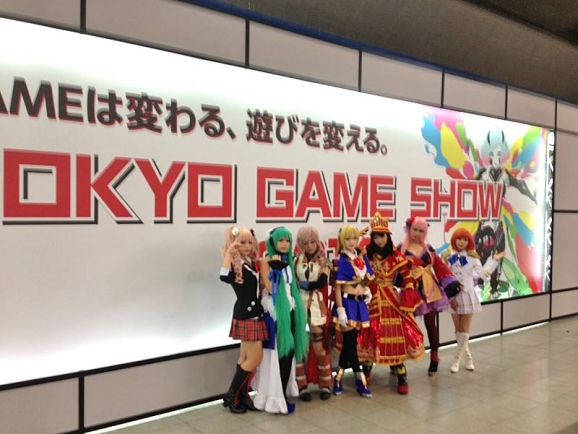 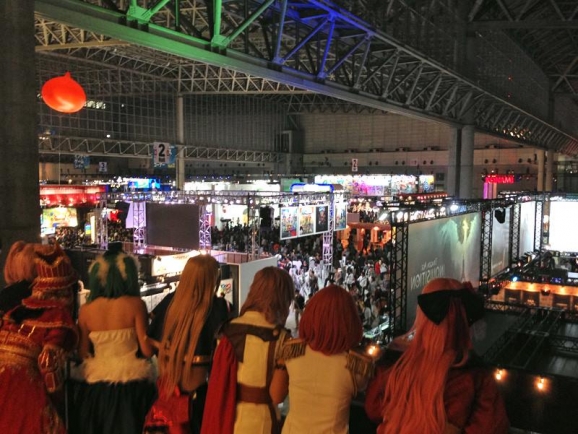 Seeing TGS HALL 1 from Above!

well it’s a disaster for me… Teostra costume is a complicated, troublesome costume. I even can’t walk well because of the armor at my boots. KANAME☆ Onii-chan and Jacky Dosai -san always help me to take away my leg armor that always tied with chain from my skirt when i walk. but i ended up broke it to make me walk well and i’m not become the one who always walk behind and make everyone wait, i wanna throw that armor but well stupidly i bring back that ‘broken’ armor back to Indonesia.

anyway, after we walk around TGS, the time finally come!
we must to performance at CCN, but because we got the 2nd round, so we still can watch the 1st round of CCN 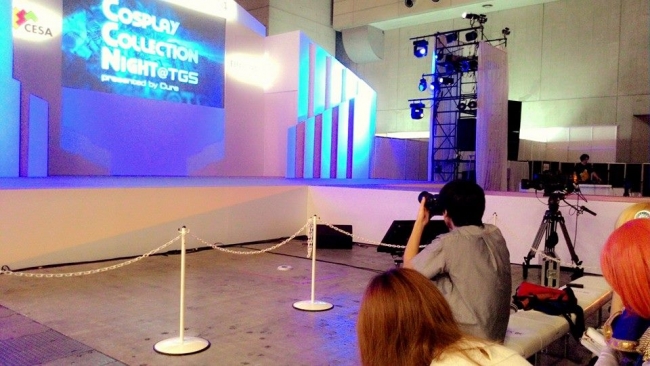 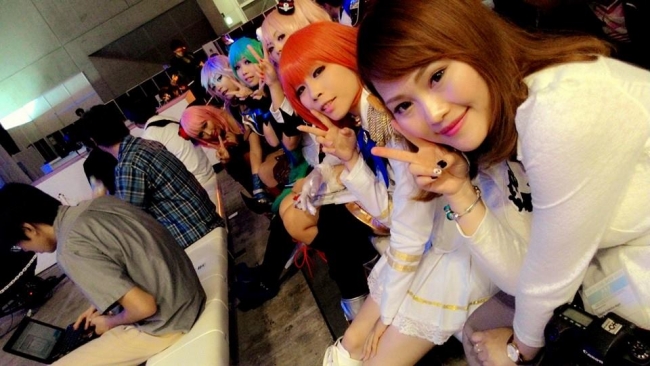 When almost the last participant come out, we back to the Back stage to prepare and do selfie, exchange coscard!
the back stage are so crowded so many awesome cosplayers!

And finally we must to performance at CCN!

You can watch our performance here

That’s all TGS DAY 1, but we still have TGS DAY 2,
we go back again to TGS at the last day, Kondo-san ask us are we want to have a little Otaku Trip or still cosplay?
we dicided to still cosplay at TGS on day 2
and finally we can ‘enjoy’ the event more!

when we arrived at Makuhari Messe, we’re separated mostly everyone go to Hall 1, to enjoy the TGS, but me i ended up ‘trapped’ on Hall 2 [cosplay area] and can’t go anywhere, so many people taking picture with me, so many Photographer and Cosplayer! but I was happy and did not feel any regret, well because i already walk around TGS HALL 1 on day 1, so why not if i try to “feel how to be a cosplayers in Japan”

Anyway this is some photo by awesome photographer on Hall 2!

And i meet KANAME☆ Onii-chan!! 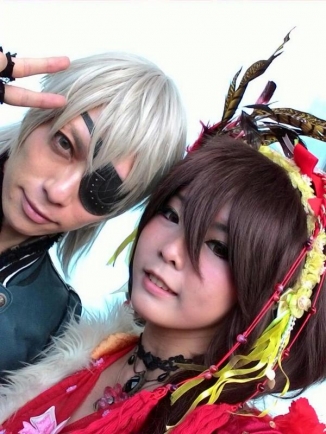 that’s all for the Tokyo Game Show 2014!
Check out TGS video that featured me on there :’D

and now back to our Little Japan Otaku Trip
Afternoon after back from TGS Day 2, we decided to have a little trip until our last day~
it’s go around japan!
and i’m so sorry because of my phone already die… i didn’t take too much photo.

well start from, we go to Odaiba VISIT GUNDAM and watch Gundam ‘performance’.Then we have dinner at Japanese Restaurant there, and walk around Ocean City, there’s alot of couple who are lovey dovey around. we also see ‘small liberty statue’ on Odaiba

the fun fact is, i drop my glasses that i buy from Daiso in Indonesia at Japanese Restautant where we eat..
and i just remember it when i back to hotel~

In our last day, we go to Asakusa, i eat ice cream

Anyeay this is my Favorite drink from Japan! Calpis Water, and i found indonesia version of it called ‘Calpico Frezz’

then we continue our jurney go to Harajuku,

but unfortunatedly my phone already die, i didn’t have much memories on my phone
but i hope i still can remember it until i go back to Japan again

This is the last day, means we must go back to our country,

Thank you Tokyo Game Show! Thank you Everyone! this is a extraordinary experience which is very valuable for me!
I hope we can meet again! and share our experience together again!

also, Thank You for everyone who read this super long blog. i hope you understand my bad english languange
Have a nice day everyone!

Yukitora Keiji is an Fashion Designer and Cosplayer based in Jakarta, Indonesia

Want Yukitora at your event?

If you are a fan, recommend Yukitora Keiji as a Guest to your local convention/event.

If you are an event organizer, visit the Booking page! to invite Yukitora Keiji to your event, or you can contact Yukitora Keiji's Manager